The concept of keeping creative works of art alive and available for viewing on the Let Art Live On website, has led to the birth of a new company and website, Lalo Publishing, Inc. (“LPI”), thanks to the excellent work on new LPI Vice-President of Marketing and Communication Jorge Amselle. Visit www.lalopublishing.com and see what books and workbooks are available and are planned for the near future.

Chips Lickson’s book, WARRIOR OF MANY FACES: An American Clandestine Operative in Castro’s Cuba and Beyond was published in November, 2019. Reading like a spy novel, this fact-based fictional account of an American called upon to do many dangerous missions, is available on Amazon and was available at several regional bookstores. The current pandemic has shifted access to this book onto the web via Amazon. It is also available as a Kindle book.

Chips’ conflict resolution book, IRONING IT OUT: Seven Simple Steps to Resolving Conflict, was last published by Crisp Publications in 1996. This book originally sold thousands of copies in both the English speaking world and has been translated into Italian and Russian. It was out-of-print for many years (although people still bought used copies on Amazon). A revised and updated version of this well-known work was published by LPI in June, 2020. A Pocket Edition summarizing the Seven Simple Steps is scheduled for publication by LPI in July, 2020. These books are also available on Amazon.

Carol Cable, a very talented artist and experienced book designer, has been an essential part of the books from LPI so far. She is the Manager of Art and Design for the new company.

The Great Pandemic and quest for racial justice has made Conflict Resolution such a big topic these days on a national level and in many local jurisdictions (including Front Royal and Warren County, Virginia).

Several other titles are planned for coming months from LPI and are expected to be part of the “Ironing It Out” series. LPI also invites other authors to submit ideas or chapters of their potential books for consideration of the LPI Editorial Team.

While all of us are holding our breath (sometimes literally) to see what will happen with the Covid-19 Pandemic, our wonderful Lalo Collection of Art and Sculpture remains in safe and secure storage. Online sales have been minimal at best and, with the exception of a few art pieces at the Blue Wing Frog restaurant in Front Royal, no Lalo art can be seen at physical locations.

Those of us involved in Lalo Art (Let Art Live On, Inc.) are waiting to see how the original concept of art being seen both online and in physical locations will work out. It’s even too soon to plan, but readers should know the original concept for this site ( good art should live on even beyond the life of the artist) and the art available through us is still very much on the minds of those who care.

We all mourn the loss of our talented Life Member Reed Armstrong. His beautiful sculpture of an angel is secure and at the heart of the Lalo Collection. Reed’s wife, Roxolana, a wonderful artist and a part of Lalo since Day one, remains in our heart.

We were planning to have a large art show and sale in the Spring 2020, but those plans have been shelved until this winter at the earliest. Perhaps the Spring Show and Sale will go forward in 2021.

A Clandestine American Operative in Castro’s Cuba and Beyond

Washington, DC, November, 2019 – This is a true story of the early life and beyond of J. C. Herbert Bryant, END_OF_DOCUMENT_TOKEN_TO_BE_REPLACED

A Future With Out Poverty, Inc. seeks out artists living in poverty and provides them and their communities with resources they need to better their lives, including LALO, Inc.’s online platform and resources that allow these artists to share their talents with the world and financially support themselves and their families.

A Future without Poverty, a 501(c)(3) nonprofit organization that works with communities to create opportunities, provide resources and empower people in a continual journey to eliminate poverty, and Let Art Live On,™ a company dedicated to the preservation of great art, are working to empower artists living in poverty.

The Buy Art, Fight Poverty™ project provides artists struggling to make ends meet with the resources they need to sell their work and better their economic situation utilizing their own talents and hard work. 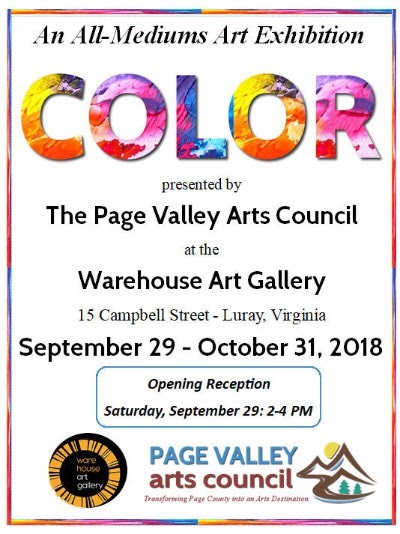 The Page Valley Arts Council is sponsoring an Art Show 29 Sept-31 Oct with the theme “Color”. It should be an interesting show and will include paintings, photographs, sculpture, stained glass, dolls, etc. There will be a free Artists’ Reception on 29 Sept from 2-4pm. We hope you will come!

First the June event had to be postponed because of a Civil War re-enactment that did not happen. Next there was a problem with the air-conditioning at Brooklyns. Now that that is fixed, the Board is saddened to announce that the Summer Reception will be not be held. Our apologies to all Lalo members and friends who were asked to hold the date open for the event.

Due to the Civil War re-enactment taking place on Main Street in Front Royal this coming weekend, we regret to announce the postponement of our 2018 Spring Reception. A new date has not yet been selected by the Special Events Committee head & LALO Vice President Jennifer Nicholson. “We are committed to going forward with this wonderful evening of art, music and food we had planned,” said Jennifer. “Watch for the new date – probably in July,” she added.

WATCH FOR REFUGE FOR A SCOUNDREL™, THE UPCOMING NOVEL BASED ON THE PRESSURE – PACKED, EXCITING LIFE AND TIMES OF AN AMERICAN HERO. PRESENTLY, HE CANNOT BE NAMED (FOR LEGAL PURPOSES) BUT THIS STORY, BASED ON REAL FACTS, IS BOUND TO KEEP READERS ON THE EDGE OF THEIR SEATS! Jonathan Carlyton (a fictitious name) has led an amazing life. Readers of the book and listeners of the Audio Version will have difficulty accepting that all of this could happen to one life, but IT DID HAPPEN and this fictionalized account of real experiences is certain to entertain and arouse feelings of both patriotism and wonder. Jonathan’s personal roots (family ties) go back to the beginning days of British America, to Colonial Times, to America’s struggle in time of great wars and then up to current days. END_OF_DOCUMENT_TOKEN_TO_BE_REPLACED

The Board of Directors of LALO, Inc. has announced that the Spring Reception will be held June 9, 2018, at the new Gallery Area of Brooklyn’s Marketplace upstairs on the Main Street, Font Royal, VA facility (formerly Kibler’s Furniture Store). END_OF_DOCUMENT_TOKEN_TO_BE_REPLACED